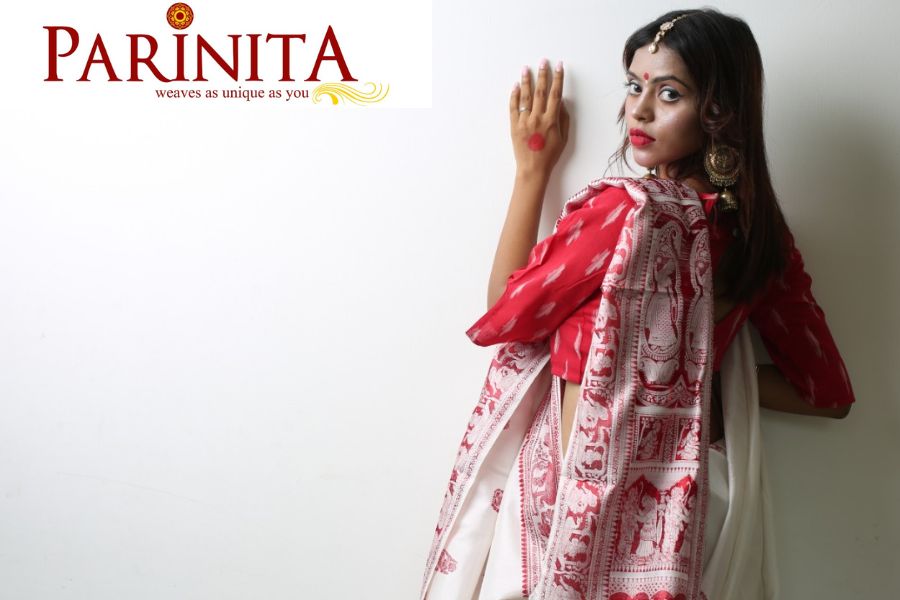 September 26: Unstitched and ranging between six to nine meters long, the saree has draped across the waists and shoulders of women across India, representing tradition and style. The garment can be traced back to the Indus Valley civilization, with evidence of wear from 2800 BC. Sarees are uniquely crafted and worn differently across the Indian subcontinent, with every region celebrating this beautiful garment in their own way. Over time, each region developed its own special weaves, motifs, patterns, and styles. Kanchipuram sarees became the hallmark of sarees in the South, Banarasi sarees from the North made Banaras even more famous, and the West became known for many different types of sarees such as Patola and Bandhej. This leaves us with the gnawing question – what about the East? Even though the saree weaving art of Eastern India isn’t as popularly known as sarees from other parts, nevertheless, the East also developed its own unique identity through sarees like Baluchari, Tussar (Tassar), Garad (Gorod), Bishnupuri, Jamdani, Muslin, and more, which are equally exquisite. This underrecognition can, in part, be attributed to the humble nature of people from the East and their almost rustic and idyllic culture, which is still untouched by self-aggrandizement. However, that shouldn’t take any credit away from the artisans who have been weaving beautiful sarees for generations.

One notable feature of sarees from Eastern India, particularly Bengal, is that the region specializes not only in silk sarees like Tussar but also in cotton sarees like Tant and Muslin, which are better suited for regular wear given the region’s humid climate. In fact, about 200 years ago, Dhakai Muslin was the most expensive fabric on the planet. Though the original art of making the original Dhakai muslin is now lost, the muslin from Bengal and Dhaka is still one of the airiest and light cotton fabrics. There are many different types of silk sarees also from Bengal, such as Baluchari, which are known for their sumptuous silk and depiction of mythological figures and events on the pallav or Garad sarees, which are stapled wear for auspicious occasions and are never dyed to maintain their purity. Garad sarees also owe their fame to Bollywood, which has used them time and again to portray Bengali culture, to the extent of even stereotyping.

Nowadays, awareness of different sarees from Bengal, Orissa, and Assam has started spreading thanks to the rise of internet marketplaces and eCommerce websites. You can find pretty much all kinds of sarees online, but the authenticity of the sarees through these channels remains an issue. Therefore, most online shoppers turn to online niche shops like Parinita(https://www.parinita.co.in/ ), which focuses only on sarees and ethnic fashion from Bengal. There are many initiatives from the local governments as well to preserve the craft and support the weaving industry by ensuring that weavers and artisans get fair compensation. The collective effort of the government, NGOs, and private businesses gives hope that the future of sarees from Eastern India will be promising.

The post Sarees of the East appeared first on Republic News Today.