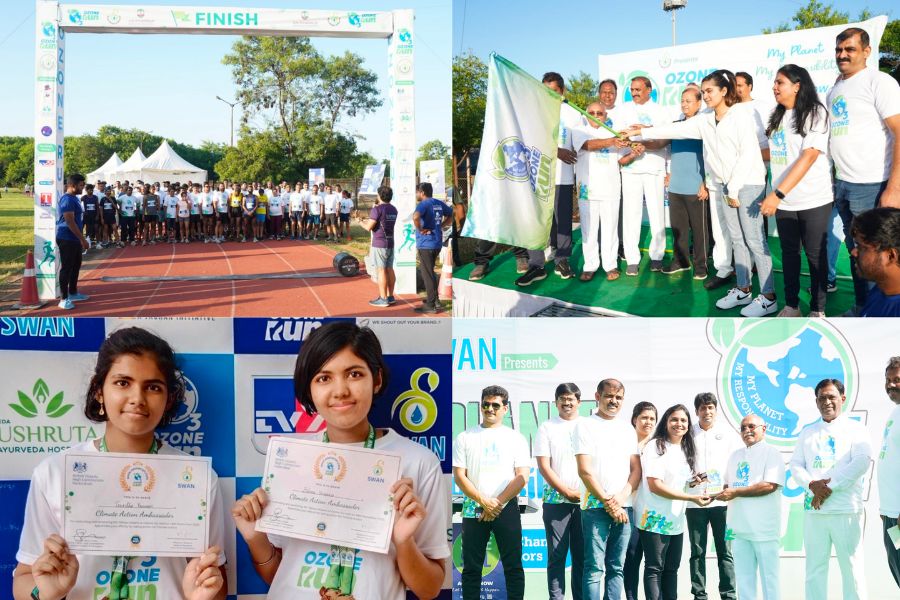 Hyderabad, September 20: Hyderabad witnessed the successful completion of India’s first ‘Ozone Run’ powered by ‘Save Water And Nature’ (SWAN) to raise awareness among the denizens to save Mother Earth and the ozone layer against the Sun’s ultraviolet radiation.

The 10-km, 5km & 2km Ozone Run witnessed the participation of tens of hundreds of people from all walks of life in Hyderabad.  The run was organized to commemorate the International Day for the Preservation of Ozone Layer on September 18th. 2000+people have participated in ozone run 2022 held at Gachibowli Stadium, Hyderabad

Ozone Run is the brainchild of the two iconic figures of Hyderabad—Bilvoa Vunnam and Teerdha Vunnam.  The idea of Ozone running cropped up following a discussion between the Vunnam’s on the pollution, the huge presence of air conditioners, and the chemicals released, mainly chlorofluorocarbons (CFCs) and their ill effects on the environment. The Vunnam Sisters received the Climate Action Ambassador Award for their contributions over the past 13 years of working on Climate Action by the British Deputy High Commissioner to AP and Telangana.

The Ozone Run witnessed a presentation on the Ozone layer and how to contribute to climate action. The climate action ambassador awards with silver and gold medals were given away to those who motivated more than 25 or 50 people to participate in this mission about Climate Action. During the Ozone Run, saplings were distributed to all the participants in the event by Green India Challenge, and a session on ‘Save Soil’ was conducted to spread awareness on soil conservation. With the unconditional support of Mr. Joginapally Santosh Kumar, M.P. for Ozone Run and such green initiatives, his team Mr. Raghava S, Mr. Karunakar Reddy, Mr Kishore Goud & Mr. Purna Chander released a poster on ‘Prati Vurilo prati gudilo Gammi Chettu’ is planning to plant 1.25 lakhs saplings this Dussehra. As stated by Bilvoa Vunnam, “The United Nations Sustainable Development Goals (UNSDGs) are 17 goals that all 193 UN Member nations have agreed to fulfil by 2030.” They embarked on a daring plan to solve pressing problems facing human civilization and the natural world. The moment has come to increase our understanding and abilities to deal effectively with climate change (SDG 13). As a result, we’ve taken it upon ourselves to promote and organize a 10-kilometre run in Hyderabad, which we’ve dubbed the “Ozone Run” to mitigate the negative impacts of climate change on the ozone layer.

Teerdha Vunnam says, “Ozone Run received overwhelming success in Hyderabad. We wish that every city and state across the country should organize such runs to spread awareness among the masses on the impact of global warming on the stratospheric ozone layer”. Observations indicate that as greenhouse gasses accumulate and warm the lower atmosphere (troposphere), a cooling is occurring in the upper atmosphere (stratosphere). The heat from the Earth’s surface that would normally travel through the troposphere and stratosphere and eventually escape into space is now largely contained (or confined to the troposphere). The quick fix is to increase the amount of vegetation in urban areas.

The Ozone Run featured three types of races, i.e. 10K, 5K, and 2K. Over 1,000 participants from all walks of life and different age groups participated in this inclusive run and gained winner trophies and prizes too.

Meghana Musunuri, the founder of SWAN and chairperson of Fountainhead Global School & Junior College, said, “We provided facilities like Water points, Mobile Toilets, First Aid, Ambulances, Breakfast, and Selfie points during the Ozone run. The first and second runner-ups were given prizes in different categories. The money raised from this event will be used in creating more lung spaces in Hyderabad city.”

Meghana Musunuri said that the teachers and students from Fountainhead Global School played a major role in spreading awareness on climate action and the ozone layer at the Ozone Run event. Teachers from Narayana School & Fountainhead Global School participated as volunteers at the event. The students are on a mission of how to raise forests, and they are excited about this new form of education. The success of conducting the event lies in mass participation, promotion of social awareness and a sense of responsibility towards Mother Earth through this “Ozone Run”.